The following blog post comes to us from Whitney Oachs, a student at the University of St. Thomas in St. Paul, Minnesota. Whitney recently joined the fight against human trafficking, and reflects on her work thus far. We hope this gets your thinking about your journey. What’s been your experience in student-run anti-slavery clubs? Email us at info@thefreeproject.org!

When Dr. Williard first approached me about getting involved with the FREE Project, I

was unsure how I would be able to help. As a (relatively) uneducated student surrounded by

people with PhDs, I felt as if any contribution of mine would be somewhat irrelevant. Despite

this, I tried earnestly to apply myself at our early meetings, where we discussed our mission,

goals, and definitions of unfreedom. What amazed me as early as our first meeting, was the

interdisciplinary approach my professors had in mind for the FREE Project. Our meetings were

focused on a diverse dialogue rather than dominated by academia, making the conversation more

By creating this diverse and approachable atmosphere, I was able to join in a

trafficking. Rather, by speaking about slavery’s legacies alongside contemporary slavery, it

became clear to me that all forms of unfreedom feed off of one another, and are kept alive by

systemic powers within legislature and social structures. Through those early meetings I began to

understand how connected we are to modern slavery, and how everyone has a part to play in

In November we had our debut FREE project event, where four professors and I

introduced our concepts of contemporary slavery and its role in society. While I focused on debt

bondage among migrant workers in the garment industry in South Asia, my biggest emphasis

was on the role students have to play. Due to of our age and economic standing, most students

feel rather powerless when it comes to combating global injustice. But because young adults,

particularly women, spend the most per-capita on clothing, our spending habits actually have a

tremendous impact on the market. By reject unethically-made clothing, clothing stores such as

process, leading to a safer environment for their workers abroad. 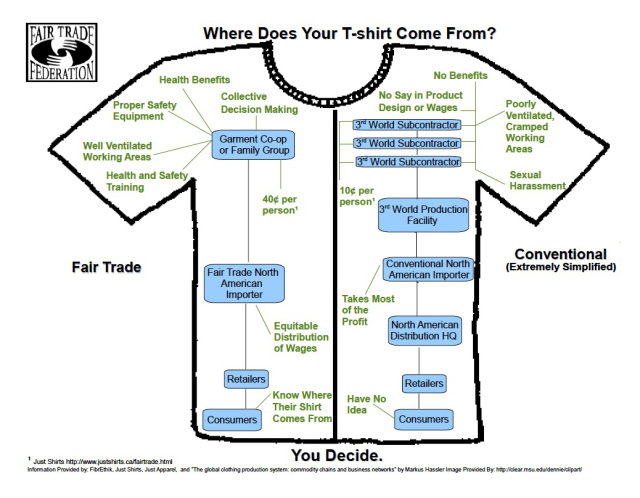 Whitney included this image in her recent Free Project presentation about slavery in the garment industry.

While I was happy with my presentation, what blew me away the most about that initial

event was the variety of topics our speakers covered. One topic that hit home to me was

unfreedom in the sex-trafficking industry. The pervasiveness of victim-blaming and the

nation. Young women, particularly young women of color, are taken advantage of and then

shunned by the populous for the work they were coerced or forced to do. This is particularly a

problem in Minnesota, where the Mall of America is a leader in trafficking young girls.

Despite the relevance of sex-trafficking and debt-bondage, my favorite part of that initial

event was the commentary on the legacy of slavery in America. In a time where the words

“Black Lives Matter” represent a controversial topic, I found our focus a striking reminder as to

why our African American communities are speaking up. Just because traditional slavery has

been abolished for many years, doesn’t mean there isn’t a lot of resentment and institutionalized

oppression left to sift through. America has a long way to go before becoming a place where “all

men are created equal,” and it is organizations like the FREE Project that help bring that fact to light.

I am thankful be a part of the FREE Project at St. Thomas, because so rarely do I come

across a club as diverse and interdisciplinary as this one. Because of the range of perspectives

present at each meeting, I feel as though I am truly getting the well-rounded experience that

liberal arts colleges like mine intend. By bringing so many voices together, I feel like we have

the ability to actually change something. Perhaps for now our impact will be only in Minnesota,

but I can see a future where the FREE Project at St. Thomas impacts people all over the country

by bringing us together under a common cause–to abolish modern slavery.