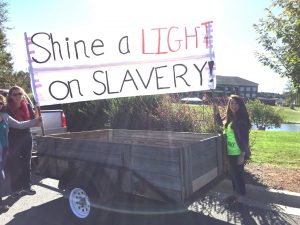 Gardner-Webb’s club, Release, is proud to announce our partnership as a chapter of Historians Against Slavery and The Free Project! We are proud to be part of a large organization that shares our goals and values. Being in an academic environment has opened our member’s eyes to the great evils of slavery around the world and our higher education has provided us with tools we need to stop the injustice that is human trafficking. Much like Historians Against Slavery (HAS), we aim to use our education and our connections to spread awareness about modern day slavery and how every individual can take part in eliminating that injustice. It is no secret that slavery has been a part of humanity’s past, but few realize the extent of slavery within today’s modern context and how it affects us all. We look forward to our continual partnership with HAS and wish to provide you, the reader, with a little background of our club and what we do on a yearly bases.

In comparison, our meek little club of 16 dedicated members seems like it is no match for the 27 million slaves that are being held captive across our world. However, our members are not threatened or belittled by such statistics. One of the quotes we continually remind ourselves of is from Margaret Mead. Her quote reads that one should “never underestimate the power of a small group of committed people to change the world. In fact, it is the only thing that ever has.” So, with each and every passionate member, we continually calibrate our diverse talents and creativity to put on a number of events every school semester.

Every semester, our events are different and every year they get bigger and spread awareness to more and more people. In the fall semester of 2014, Release hosted a total of three events. We prepared a booth at Gardner-Webb’s club fair to inform others of our intentions and encourage those who were interested to join our weekly meeting. At these weekly meeting we plan our next event, enjoy each other’s company, and educate ourselves on current events involving human trafficking. After the club fair, we planned and prepared to have our own float in Gardner-Webb’s homecoming parade. After decorating colorful posters weeks in advance, we put together our float and rode around Boiling Springs NC to raise awareness about the need to end human trafficking. Our theme for the float was ‘Shine A Light On Slavery’ and our bright display did just that, we shined a light on the issue of human trafficking. After these two successful events, we hosted the largest event that Release has put on to date. We invited Majesty Rose, a former American Idol contestant, to perform a concert on campus and raise money for a local organization that fights trafficking called Justice Ministries (based in Charlotte NC). We gained around hundreds of dollars for Justice Ministries and gained a number of supporters within the process.

This semester, Release has already showed off a delightful display of our club at the campus’ club fair. Currently, we are creating ways to spread awareness on campus during the national EndIt Movement on February 27th. After that event, we are hosting our biggest event during the spring semester called Human Trafficking Awareness Week. That week we will host a number of events including the Rave to Save, a Stand for Freedom bonfire, a tour of some of our local fair trade companies, human trafficking fair, and an open mic night. These are our most attended events during the school year and we’re excited to see the outcome of it this year. In April, we are hoping to raise money to attend one of HAS’s national conferences. There we will connect with other organization like ourselves and gain new ideas on how to expand and promote our club’s mission.

All in all, Release is an outstanding club fueled by passion, dedication, and a deep desire to bring justice to the nations. Check us out on Facebook at https://www.facebook.com/GWUrelease and Instagram @GWU_Release. Continue following our newly founded blog @gwureleaseclub.wordpress.com